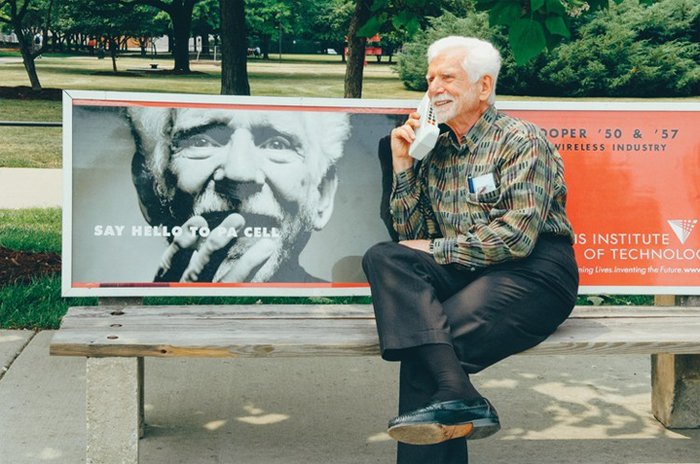 With his signature charm, Martin “Marty” Cooper (EE ’50, M.S. ’57) will not only tell you an improbable idea is possible, but he’ll also map out a way to achieve it.

If you don’t believe it, consider your smartphone.

In the early 1970s, communications giant AT&T dismissed the idea of personal cell phones and instead focused on what it thought people wanted: in-dash car telephones. The company planned to offer the service under the condition that it be the nation’s sole mobile communications provider. When it sought to secure this monopoly from the Federal Communications Commission, Cooper and his team at Motorola sprang into action.

They were determined to give people a truly mobile device that wouldn’t keep them “trapped in their cars.” So, in a mind-blowing three months they created a prototype—the 2.5-pound DynaTAC.

On April 3, 1973, with a journalist in tow, Cooper took the DynaTAC outside a press conference in New York and dialed his rival at AT&T’s Bell Labs to share the good news. The occasion marked the world’s first personal cell phone call, which contributed materially to the demise of AT&T’s planned monopoly. Forty-two years later, there are more than 7 billion cell phone subscribers worldwide.

Clearly, Cooper saw something others missed.

“There were very few people who thought it would ever be big business, so I was really an outlier,” says Cooper, who at 86 still serves as a consultant for the wireless industry…