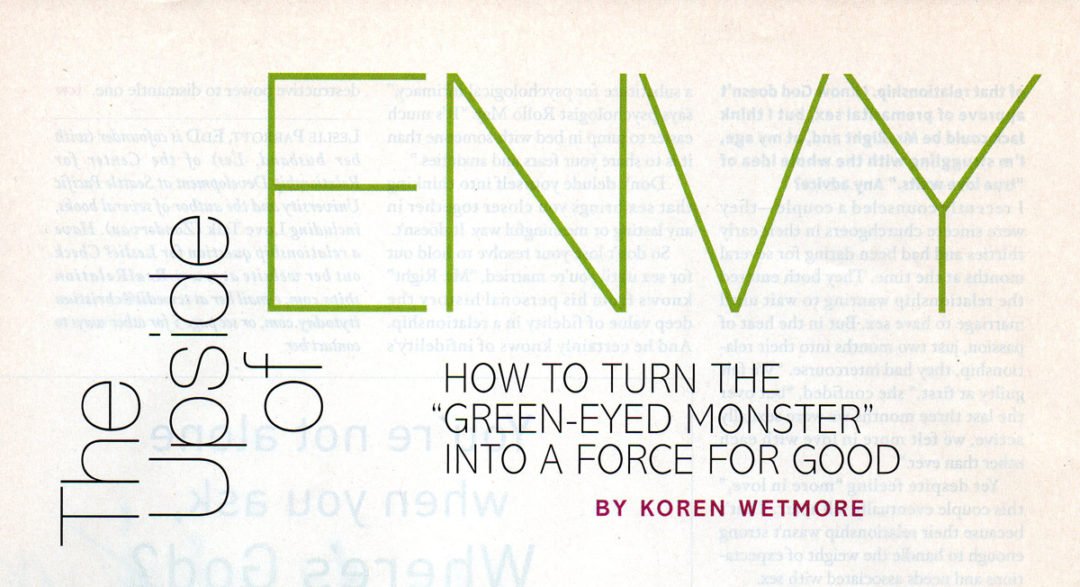 The Upside of Envy

How to turn the “green-eyed monster” into a force for good.

I listen as my friend Melissa sings special music for our congregation, her powerful vocals resonating throughout the sanctuary. People smile and nod, obviously moved. Meanwhile, I squirm in my seat, an uncomfortable longing rising in my heart—one that makes me feel shamefully sinful.

This would be fine if I simply admired her talent, but I actually covet it for my own, envying her almost to the point of resentment.

It seems I’ve forgotten that I, too, have been gifted with a good singing voice, along with many other God-given talents. Unfortunately, this isn’t the only time the green monster of envy has attacked. Another twinge struck when a colleague received a writing award. (Wish it were me.) Yet another hit at the beach as a woman with a toned, tanned body strode past, her head held high, while mine lowered to glance at the dimpled flesh on my out-of-shape thighs.

You could blame it on the media, with its images of perfect faces and lives. You even could blame the world’s carnal influence. But envy was around long before high-definition television or People magazine. Left unchecked, it ruins friendships, marriages, even lives. When used as a motivational force, however, envy has the power to prompt positive change. It’s our opportunity to overcome evil with good (Romans 12:21).

“Envy by definition is sin. It says, ‘I want what you have,’” says psychologist Ginger Gabriel, PhD, author of Being a Woman of God. “But it can become a motivator when you say, ‘What do I have to do to get where she is?’”

Sometimes we envy things that aren’t biblical or healthy for us, or things that we never could attain even with our best effort. In those cases we need to turn to God for correction or comfort. But many times envy can show us things we wouldn’t have imagined or thought were possible…