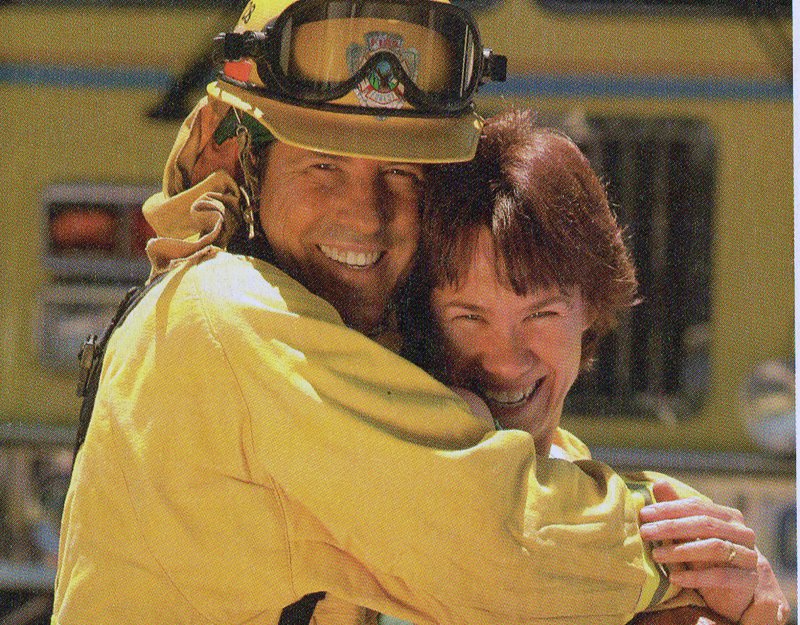 Wildfire! Would my home—and my husband—survive?

It seemed all of Southern California was burning, with major fires in San Diego, Los Angeles and San Bernardino Counties. Looking toward our mountain home, I had a front-row view of the devastation. A serpentine trail of fire lit the summit. And somewhere in the midst of it was my husband…

Bathed in the amber glow of emergency lights, my husband, Tony, kissed our 10-year-old son, Joshua, and me goodbye. It was the night of October 25, 2003, and what would become the 91,000-acre Old Fire crept closer to our mountain town of Crestline, California.

Ours was a drought- and beetle-stricken area populated by dead pine trees. Any fire, officials feared, would hit the deadwood and spark a firestorm that could consume the entire mountaintop.

Ignited by arsonists, the blaze erupted that morning and by early afternoon most of the town had evacuated. We were among the last to leave. I glanced one last time at my husband of 16 years, wondering if this was our final moment together.
I quickly shoved the thought aside.

Joshua and I would seek safety in the desert below, while my husband, a firefighter, would stay behind. In the face of our dire circumstances, our words were few.

In the year before the fire, we’d grown distant. Career and ministry disappointments had driven my husband far from the church until it seemed he was angry at God himself. His anger dwindled to doubt and before long he didn’t believe in anything—not God, not dreams and, I feared, not us.

The drive down the back of the mountain was lonely, although I had Joshua, two dogs, two pet rats, and a cat to keep me company. Twelve miles down, we parked outside Silverwood Lake State Park, hoping to get a campsite when the park opened at dawn.

My son slept curled in the fur of our Belgian sheepdog in the back of our SUV. But sleep eluded me. My focus remained on the reports echoing from my handheld radio, which was tuned to the emergency operation frequencies. Fire was everywhere, and crews—Tony among them—were fighting desperately to stop it.

Come morning, a red pickup pulled in behind me. I was surprised to see my neighbor Shanna jump out. We embraced in a rush of affection and relief that we’d have each other’s company on this journey.

The park opened its gates and offered us free camping. Too tired to pitch a tent, we rested atop picnic tables but couldn’t sleep. Our peace was stolen by the growing smoke cloud behind the nearest hillside.

Lunchtime found us dining with two older women, Diana and Sherry, who set up camp by us. After lunch, Diana pulled me aside to ask what was troubling me. It was an odd question, considering we all faced the same trial.

“The past year has been hard for my husband,” I explained. “He’s been hurt by Christian men who acted ungodly, a boss who didn’t follow through on a promised promotion, and the loss of dreams he’s worked so hard for.” I paused, unsure if I should speak my heart. “I’m afraid,” I said. “Afraid for him, and afraid for us.”

Diana was silent a moment, then pointed to the hillside, where flames had just begun to lick the summit. “Your husband has a big problem, so God may have a big answer,” she said. “I believe He’ll use this fire to get his attention…